Pennsylvania Dog Law – Something to Chew On

In a conversation with her dog Zoey, our legal assistant Deb Hatfield helps us focus on PA’s Dog Bite Law and Its Protections

Learn about Pennsylvania Dog Law and how it affects you if you are injured in an animal attack:

Since Rankin & Gregory help people after they are victims of dog bites, often when Pennsylvania’s Dog Bite Laws are not known, or worse, ignored, my dog Zoey and I wanted to share some info and tips about Dog Bite Prevention and PA’s Dog Bite Law.

“Zoey, come! It’s time for your lesson.” Never one to miss the opportunity to earn a treat, my golden retriever came over and sat front and center, looking up at me expectantly. “You’ve already learned Sit, Stay, and Heel. I think it’s time to move to the next level. Today, I want you to learn about the Pennsylvania Dog Law.

Yes, I know that the law is really for people but I think it is a very important law to learn so you are going to help me teach it to dog owners everywhere. It is a very good law, designed to protect both people and dogs.  We want all of our friends to be safe, don’t we?

Good point, Zoey. The Dog Law is really just common sense but sometimes we humans need reminding. In its entirety, the Dog Law encompasses many aspects of dog ownership including licensing, rabies quarantines, kennels, and the dangerous dog chapter. But today, we are going to talk about the portion of the act that deals with confinement and control.  Section 459-305 of the Pennsylvania Dog Law states:

(a)       Confinement and control.– It shall be unlawful for the owner or keeper of any dog to fail to keep at all times the dog in any of the following manners:

(2)       firmly secured by means of a collar and chain or another device so that it cannot stray beyond the premises on which it is secured; o

(3)       under the reasonable control of some person, or when engaged in lawful hunting, exhibition, performance events or field training.

Good question, Zoey. “Confined within the premises of the owner” means just that. If a dog runs off its owner’s property and causes harm to another dog or to an individual, the owner has failed to follow the law and can be held negligent, even if he or she did not intend for the dog to get loose and cause harm.  Premises means inside the home or inside the property lines of the owner’s land.

Zoey’s head tilted to the other side.

Under state law in Pennsylvania, dogs are not required to be on a leash, only under control of some person. However, municipalities can and often do require dogs to be on a leash when in public areas.  Even for areas that do not require dogs to be on a leash, I believe that a responsible owner should keep their dog on a leash at all times for the safety of the dog and others.  It is rare for a dog to be so well trained AND for the owner to be so vigilant that all possibilities for mistakes and accidents are completely eliminated. Why risk injury or worse when a leash can so easily provide an additional layer of protection?

True.  Simply having a dog on the leash does not mean the dog is under the owner’s control.  If the dog is 15 feet away from the owner on a flexi-lead, the owner has very little, if any, control over that dog.  Similarly, there is only the illusion of control if the owner has the dog on a shorter lead but is paying no attention to the surroundings. Under reasonable control means having control over the dog and whatever situation might develop involving the dog.  Awareness of the surroundings on the part of the owner is an absolute necessity.

What’s that? The “one free bite” law? Nope, that is a myth so don’t even think about it. Pennsylvania does not give one free bite. If a dog injures someone, the dog owner can be held liable for the victim’s damages even if it was the dog’s first bite.

Yes, I know, Zoey. You are a lover, not a biter. But dogs can cause injuries that do not involve biting. Remember the time we were on a walk and you started to chase the squirrel? Remember how I was able to hold your leash to keep you from running into the road in front of the motorcycle? We could have caused a terrible accident had we not had the extra protection of the leash.  Even though you were so focused on the squirrel that you remembered no training whatsoever, I still had the other end of the leash and was able to avoid what could have been a tragedy.

Other ways a friendly dog can cause injury without biting include knocking someone over by jumping on them in greeting, inadvertently tripping a person, or unintentionally scratching a person by pawing at them for attention.  And some dogs are over-exuberant when taking treats and can accidentally nip at fingers.  In all of these situations, the owner can be found negligent and liable for injuries.

Well, Zoey, you have been such a good student today and you have earned your treat. Thank you for helping me tell others about this simple law that exists for the good of everyone. After all, you are my responsibility and I take that responsibility very seriously. I don’t want you to get hurt or to accidentally hurt someone else.  By following the dog law, we can prevent tragedy and that is a very good thing.

By Deb Hatfield, a paralegal with the personal injury firm Rankin & Gregory LLC. She has an Associates Degree in Paralegal Studies. Zoey works from home and is attending continuing education classes at Kaye Ames School for Dogs. 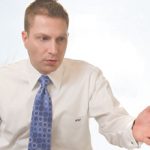